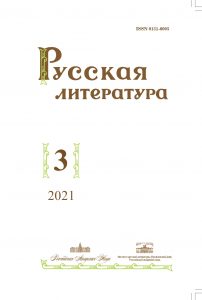 Russkaya Literatura is an academic reviewed periodical on the history of Russian literature throughout its history. One of the periodical’s immediate goals is to represent the current state of academic literary studies in the field of folkloristics, history of Ancient Russian literature, Russian 18th century literature, classical legacy of the 19th – early 20th century, literature of modernity, including the cultural loci of the metropolis and diaspora, as well as the links between the Russian and other writings. Special emphasis is laid on the studies in literary history, biographic and textual research, publication of the archival data, including the ones pertaining to the history of literary studies.

Indexed at the Russian Science Citation Index (Impact factor 0,185), Scopus (SJR 0.108) and Web of Science (WoS), Arts & Humanities Citation Index (AHCI), Core Collection (for AHCI periodicals, the impact factor is not calculated due to the specifics of the field)

The periodical is founded in 1958, and is published quarterly.

Published under the auspices of History and Philology Department, Russian Academy of Sciences.

The periodical is registered at the Ministry of Press and Mass Media of the Russian Federation
Registration number 0110194, dated 4 February 1993
ISSN 0131-6095

The periodical is published in printed version, and distributed by subscription. Postal code: 70783. The scanned version is available at the website of the co-founder, Institute of Russian Literature (Pushkinskij Dom), Russian Academy of Sciences: http://pushkinskijdom.ru//zhurnal-russkaya-literatura

The archive is accessible by the same link.

Russkaya Literatura is a non-profit edition. No fees are collected from the authors. No honorariums are paid.